Pruning a tree requires a plan; a detailed plan of exactly what branches will be removed and for what reason. Pruning for the sake of pruning does not help your tree. I regularly come across many trees that were severely damaged from poor pruning. This article will cover some of the common bad tree pruning I see and why they are bad for your trees.

I made up this term because I don’t think it has a name. It is when a mature tree has all the lower and interior small branches cut off the trunk. The owner wants the trunk to look clean and free of leaves and small branches along the trunk and major limbs. This type of pruning only makes those types of branches come back worse and thicker than before. That “hairy” or “fuzzy” appearance on some mature trees is normal and how the tree should look. Also, those small branches will not grow into large branches (which is often the thought). Removing them has no purpose other than for looks.

If that is the look you want, know that you are weakening the trees health. It creates more pruning as time goes on, and potentially shortens the life of the tree. Decay will eventually make its way into the large wounds that will be created. Those types of branches should rarely be removed in any type of proper tree pruning. 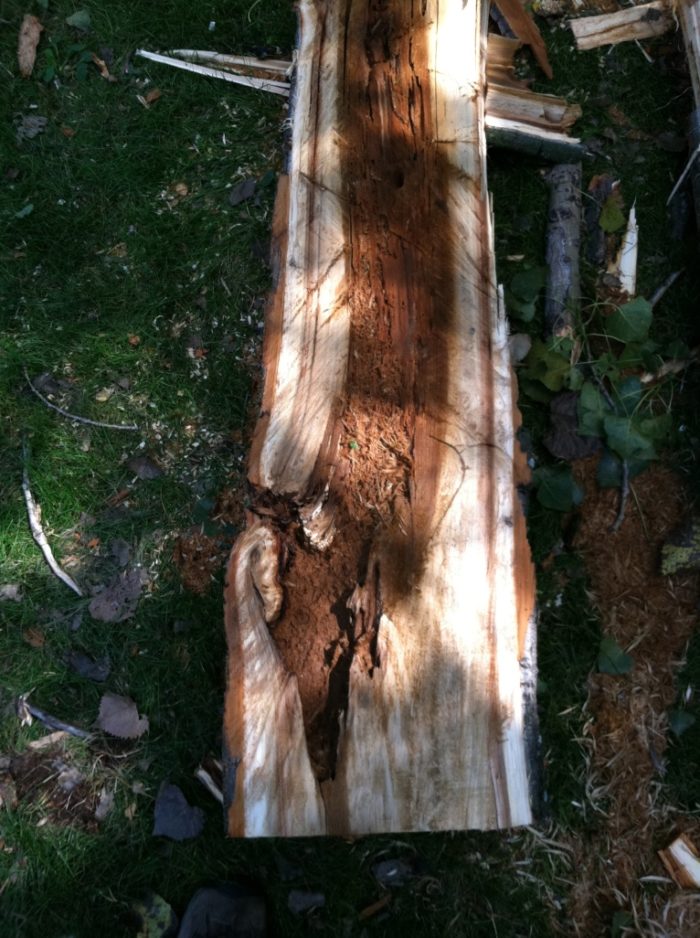 A wound on the tree was not able to seal properly from a poor pruning cut. This allowed decay to get into the tree.

This is a very common practice among inexperienced or improperly equipped tree workers. It refers to when all the lower and/or interior branches on a tree or large major branch are pruned off except for the ends or top. It makes the branch look like a lions tail where the only fluff is at the end. I most often see this in combination with the trunk cleaning. Done by tree workers who have no clear plan and are only cutting off tree parts where they can reach. Lions tailing can create several issues, including; weak branches prone to breaking, severe sprouting of shoots, sun scald, and tree stress.

If you have read my other article on tree pruning basics, you will have read the part where trimming is different from pruning. I have this in here though, because it is a major issue in trees. I often see trimming on the lower limbs and overhanging branches where the tips are trimmed back for clearance instead of the branch being pruned off to give proper clearance. Clearly there is not a plan to deal with the lower branches and the trees health suffers as a result. A well trained arborist can fix the clearance issue while providing proper pruning.

A older practice that is becoming less common, but still a major issue if its done to your tree. This is where the tops of the tree are cut off at a certain height (usually where the worker can reach) to reduce the height of the tree. The tree response with a flush of thick growth giving the tree a fuller look. This practice could not be worse for a tree.

What I hope you are able to take away from the description of these common bad pruning practices is that they are often done by people with a common theme; Limited skill, limited knowledge of trees, and limited equipment. I’m guessing you wouldn’t hire someone to only paint the lower 2/3 of your house because they can’t reach any higher. Then why hire a tree contractor who can’t reach the necessary branches to cut?